Casa Lo Alto’s Bobal wine competes in the world’s most prestigious wine competition and wins its first Gold Medal in Bordeaux, up against 3,179 wines from 26 producer countries

Venta del Moro (Valencia), 25 April, 2022 – The good work of the Casa Lo Alto team, with its concept of “Vino de Paraje” (single-vineyard wines), has just reaped its reward with the 2020 Manzán taking an important Gold Medal at the Challenge International du Vin, held recently in Bordeaux.

Manzán is the red wine made from the native Bobal variety from three small plots of gobelet-trained vines planted between 1940 and 1965. This structure saves water and protects the vines from excessive sun in the summer.

These vineyards are tilled with environmentally sustainable viticulture practices, as is carried out with the estate’s almond trees and the Garnacha vineyards, which are used to produce Rocha red wine, and the Tardana, the white grape variety that features in Trena.

To enhance the features typical of this site and its different plots, the use of synthetic chemical products is avoided in favour of a living soil, rich in microfauna, which makes each plot different. Those particular features are transmitted to each Casa Lo Alto wine.

The weather in 2020 was cool and rainy, and the grapes ripened slowly until the Bobal harvest, which took place at the end of September. Different percentages of whole bunches were used to make Manzán. The rest of the grapes were destemmed and uncrushed. Fermentation began spontaneously, using indigenous yeasts. After pressing, the must was transferred to concrete tanks and vats, where the wine was aged for 10 months on its lees. 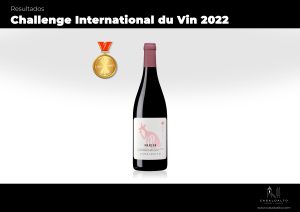 Challenge International du Vin, the oldest and most prestigious wine competition in France

The Challenge International du Vin is organised in the form of a blind tasting and is open to all wines and wine-based spirits in the world. The latest competition was held on 8 and 9 April at the Palais des Congrès in Bordeaux. The organisers describe it as “a contest that reveals talent” and it is the oldest and most famous international competition held in France.

It should be noted that each jury of tasters consists of four people: a technician, a producer, a distributor and an expert consumer, so that the prize-winning wines are an expression of the customers’ taste and also an important purchasing reference for the final consumer.

For all these reasons, the Challenge International du Vin is considered one of the most prestigious in the world, and the producers and tasters who take part value its reputation for strictness.

This website uses cookies to improve your experience while you navigate through the website. Out of these, the cookies that are categorized as necessary are stored on your browser as they are essential for the working of basic functionalities of the website. We also use third-party cookies that help us analyze and understand how you use this website. These cookies will be stored in your browser only with your consent. You also have the option to opt-out of these cookies. But opting out of some of these cookies may affect your browsing experience.
Necessary Always Enabled
Necessary cookies are absolutely essential for the website to function properly. These cookies ensure basic functionalities and security features of the website, anonymously.
Functional
Functional cookies help to perform certain functionalities like sharing the content of the website on social media platforms, collect feedbacks, and other third-party features.
Performance
Performance cookies are used to understand and analyze the key performance indexes of the website which helps in delivering a better user experience for the visitors.
Analytics
Analytical cookies are used to understand how visitors interact with the website. These cookies help provide information on metrics the number of visitors, bounce rate, traffic source, etc.
Advertisement
Advertisement cookies are used to provide visitors with relevant ads and marketing campaigns. These cookies track visitors across websites and collect information to provide customized ads.
Others
Other uncategorized cookies are those that are being analyzed and have not been classified into a category as yet.
SAVE & ACCEPT