Manzán, the Bobal estate wine from Casa Lo Alto, conquers the palates of the judges at the Canadian competition, who award it top marks 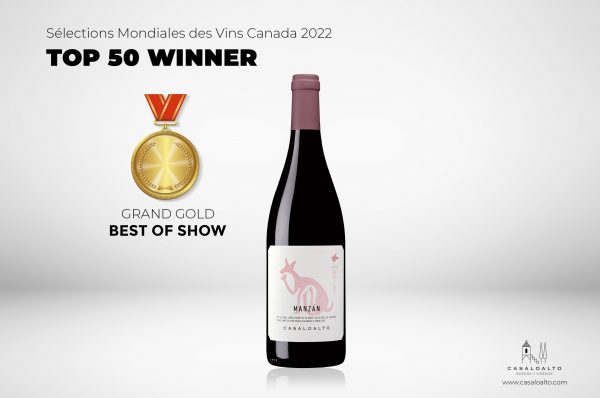 Venta del Moro, 24 October 2022 – We knew the 2020 Manzán had triumphed in Canada with a Grand Gold medal, but great anticipation had been generated among the participants, our importers and wine distributors present at the competition because it was a long time before the Top 50 list was made public.

Finally, we have received the communiqué that includes us in the distinguished list of the 50 top-scoring wines. Manzán has also been named Best in Show in the contest held this year in Montreal.

Manzán is the wine that Casa Lo Alto makes with grapes of the Bobal variety from three plots planted between 1940 and 1965 that we cultivate using gobelet training. We work with sustainable viticulture practices on rainfed vines in shallow chalky clay soils, poor in organic matter.

This wine that has just triumphed in Canada is from 2020, a vintage characterized by low temperatures, with good rainfall in spring and a dry, fungus-free summer, followed by a cool start to autumn. This slowed the ripening of the grapes, which were harvested at the end of September.

Some whole bunches are used in making Manzán. Fermentation begins spontaneously with indigenous yeasts using concrete tanks and French oak vats, where malolactic fermentation is completed. The wine is then aged for 10 months on its lees.

The result is a red wine that reflects the landscape of Casa Lo Alto: a pure wine, which the judges of the Sélections Mondiales des Vins Canada competition have appreciated. They have given it top marks to award it a Grand Gold medal, placing it among the best in the Top 50 list and making it Best in Show in its class.

All this is a great endorsement for Casa Lo Alto‘s estate wines in the Canadian market and throughout North America, with repercussions for other international markets.

The 29th Sélections Mondiales des Vins Canada is the largest international event of its kind in North America in terms of number of samples and countries from outside Europe represented, and it is one of the biggest in the world.

This website uses cookies to improve your experience while you navigate through the website. Out of these, the cookies that are categorized as necessary are stored on your browser as they are essential for the working of basic functionalities of the website. We also use third-party cookies that help us analyze and understand how you use this website. These cookies will be stored in your browser only with your consent. You also have the option to opt-out of these cookies. But opting out of some of these cookies may affect your browsing experience.
Necessary Always Enabled
Necessary cookies are absolutely essential for the website to function properly. These cookies ensure basic functionalities and security features of the website, anonymously.
Functional
Functional cookies help to perform certain functionalities like sharing the content of the website on social media platforms, collect feedbacks, and other third-party features.
Performance
Performance cookies are used to understand and analyze the key performance indexes of the website which helps in delivering a better user experience for the visitors.
Analytics
Analytical cookies are used to understand how visitors interact with the website. These cookies help provide information on metrics the number of visitors, bounce rate, traffic source, etc.
Advertisement
Advertisement cookies are used to provide visitors with relevant ads and marketing campaigns. These cookies track visitors across websites and collect information to provide customized ads.
Others
Other uncategorized cookies are those that are being analyzed and have not been classified into a category as yet.
SAVE & ACCEPT